The sports Ambassadors have worked hard all year delivering 30 active minutes a day for all pupils who want to take part! They have also come up with their own competition, spoken in assembly about sport and supported the delivery of PE in school by helping me in many ways.

I thought it was about time they got a chance to really shine, so we organised a Mini-Olympics where the Sports Ambassadors would run their own activity, coaching and mentoring pupils throughout an afternoon!

They began with a training session with our professional coach Chris, discussing why health and fitness was important, the fundamentals of coaching and how to run an activity.

Then they were set loose! Read on to see their experience in their own words - well done all of you! You are incredible Ambassadors for sport. We had to sit down and discuss why sport is important for our bodies and health.  Then we ran through what we would like to teach/coach.

There were challenges, keeping everyone interested and making sure they were listening and following instructions.  It was a lot of fun and it made me feel that I would like to be a sports coach myself one day.  Overall, it went very well.

I felt nervous at first, but after the first two groups it got easier.  I think I have improved on planning out my activity and talking to people about the importance of using the right technique. 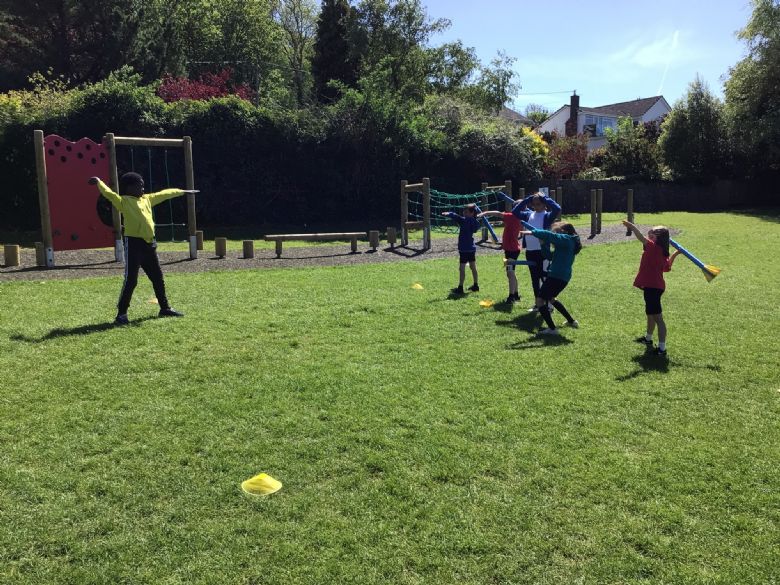 Mr. Williams (the head of sport) gave the Sport Ambassadors a short talk in the morning about what to expect. At first, I felt nervous but when I started talking to team about the event, which was javelin, the nervousness melted away.

To be a Good coach you have to be passionate about coaching, be a good listener and understand people.

It was amazing running my own activity! My team listened carefully to my instructions and tried their best. We all had fun! Some of the javelins broke and I had to adapt and manage with what we had. It went waaaay better than I thought it would and one of the younger children that I coached even threw their javelin beyond my throw!

I feel much more confident about my coaching abilities now. I have improved on teaching a class and how to assist those who need a bit more help. Also, to be resilient when things don't go as planned.

First, we got to pick which activity we wanted to do and I chose long jump. When the first class came out I played down some cones and told each of them to stand behind it, this is because I wanted to see how far they could jump from standing. Then, I got them to beat it by doing tipple jump ,which is a hop skip and a jump. Once we finished, we played some games e.g. crocodile. I got another chance to do this with the next class. I learnt that as a coach you have to be very precise when giving instructions.

Running my own activity was rather fun as everyone listened and took in what I said - I definitely learnt more about how to be a better coach! There were a few challenges as there were not enough cans so I had to adapt the activity. But other than that, there were not many challenges. It went well and I really enjoyed the experience.