The whole school felt very festive on the penultimate afternoon of term, with a special visit from Rainbow Theatre company. They performed the classic pantomime Cinderella and with pupils taking part too, everyone was fully entertained!

It was a brilliant show- complete with lots of laughs and oohs and ahhhs! The ugly sisters had us all giggling, especially when they took a liking to our very own Mr Meredith, or should I say Zak Efron?!!

We would like to take this opportunity to say a very big thank you to the PTA who funded the event for us.

Sunday the 7th July saw three year 6 families drinking tea and eating scones at the Tithe Barn along with the chair of Nailsea Council and the Friends of the Tithe Barn association for the Nailsea Young Historian of the Year Award. The judges were very impressed with all the entries from Backwell Junior School in particular and the other schools in the area and said that their job had been a most difficult one. In a blind judging, they had narrowed the winners down to a diary entry from a girl from Kingshill School and Illy White, Oliver Birchenough and Mary Sims from Backwell. Illy's ingenious model of the barn, with interesting details about the lessons taught there, received a special mention, as did Oliver's Haikus (closely checked for meter and rhyme by the judges) about the life of the Tithe Barn. They both received a Victorian penny, book tokens and a Horrible Histories book with a 3.5m timeline poster!

The overall winner of the competition was Mary Sims's Victorian classroom model that also included research about her grandfather who not only attended the school when younger, but was present to see Mary receive her winner's cup and awards!

It was a lovely afternoon and reflected well all the hard work not only of the winners but also every entry submitted. Well done!!

‘Myths and Legends’ was our whole school theme for the day and we were so pleased to see the effort that all children (and staff!) had gone to with their costumes. A fantastic array of different mythical creatures from the past (and present!).

Our theme was inspired by our visiting author- C.S. Clifford, whose ‘Walking with…’series is based on two time travelling teenagers who through a time portal, become part of a myth or legend from that time period.

We began the day with a whole school assembly where the children were gripped by time travel discussion and the art of hooking a reader in. Steve then set Year 3 and 4 a writing challenge based on the magic of waterfalls.  Year 5 and 6 then listened to a prologue of a new story based on the year 3033. The children took their inspiration and then went off to produce some fantastic pieces of writing.

A brilliant day was had by all and we would like to say thank you once again to all children (and parents) for your fantastic costumes!

The whole of Backwell Juniors got into the panto spirit last Friday afternoon. There were lots of 'Oh no he isn't!'s and 'He's behind you!'s in the air as we watched the Rainbow Theatre Company perform the classic fairy tale Snow White.

With 21 volunteers across the school performing too (including Miss Brock and Mrs Barnard!), there was lots of laughter and fun had by all!

It was a brilliant performance and a great start to the festive season here at BJS. We would like to say a very big thank you to the PTA for covering the cost of the performance. 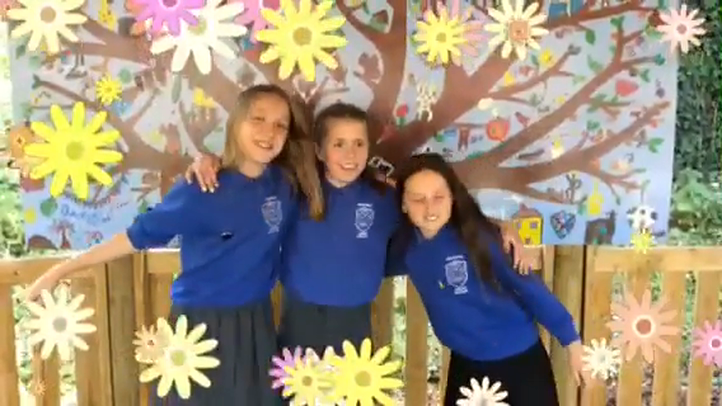 On Sunday afternoon (08.07.18) Miss Brock, Mr Meredith and three members of year 6 were invited to a celebration at the Tithe Barn in Nailsea as the children had been shortlisted in the Nailsea Young Historian of the Year competition. Following their visit to the Tithe Barn in September, all the year 6 children produced a historical response which was submitted to the competition. The entries were all fantastic and the judges told us how difficult it had been to shortlist the four finalists. In the end, they couldn't decide on four so broke their own rules and had five finalists.

At a cream tea with scones and cake, the prizes were awarded to a Year 1 girl and a Year 5 girl from different schools. Then Elly White, Emily Freeman and Evie Baxter from Backwell Junior School went up to get their certificates and book vouchers. The winner was then announced as … Elly White who received a cup to keep and the large celebration cup to hold for the year!

There were several pieces of work that were also shortlisted for finalist places also on display, many of which were entries from our school. Everyone enjoyed sharing the work and achievements of the children. The work will be on display in the Tithe Barn for a few weeks for anyone to see so do pop in and see their fantastic efforts. Well done again girls!!

Welcome to the Gallery!

Take a look at all the different things we have been up to in and around school..